skip to main | skip to sidebar

If we pray with an eternal perspective, we need not wonder if our most tearful and heartfelt pleadings are heard. This promise from the Lord is recorded in section 98 of the Doctrine and Covenants:

“Your prayers have entered into the ears of the Lord … and are recorded with this seal and testament—the Lord hath sworn and decreed that they shall be granted.

“Therefore, he giveth this promise unto you, with an immutable covenant that they shall be fulfilled; and all things wherewith you have been afflicted shall work together for your good, and to my name’s glory, saith the Lord” (D&C 98:2-3).

The Lord chose His strongest words to reassure us! Seal! Testament! Sworn! Decreed! Immutable covenant! Brothers and sisters, believe Him! God will heed your sincere and heartfelt prayers, and your faith will be strengthened.

It was also apparently a truth I needed to be reminded of now. I pulled out my notes from when I was listening to Conference live and I'd marked a couple of talks as being just for me. This was not one of them, in April. It is a talk I need in June.

I'm so grateful for all the different ways we can interact with Conference. Watching it live. Reading the talks. Watching the DVDs (I put them on when I'm getting ready for Church Sunday mornings). If I didn't know better I'd swear what they say changes every time I hear the words. But I could say the same things about the scriptures changing to be exactly what I need when I open them.

Pray with faith. Pray for faith.

Sk8er Boi and I saw each other every day for over two weeks and at least talked (usually via text) every day for the two months since we'd been dating. Then he left on a week long roadtrip to his hometown and I haven't heard from him much since he's been gone.
No worries, I told myself. He's just busy with his family and old friends. He did say that he hated to leave you for a week and it would suck if you found someone else while he was gone. He's been quick on the response when you've texted him, which hasn't been all the time or even each day because you're not a crazy needy person, and initiated the conversation at least once.
There was no indication anything was wrong before he left - why would that change?
My guy friends all assured me that I was right. There wasn't anything to be concerned about. He'd get back soon and return to his usual habits of saying good morning every day and all would be well.
But I couldn't shake that niggling little doubt brought on by years of guys going ghost on me for no discernible reason and all associated insecurities. We're also not officially defined as boyfriend/girlfriend yet, so there's a certain lack of commitment from both parties. I've had a hard time focusing on going about my daily routine and tried to mentally list all the reasons he might have for having spent his vacation talking himself out of us and then listing all the reasons why those reasons were crazy and he wouldn't think that.
I hate it. I'm a classic overthinker and it really, really, really is hard to stop. There was absolutely nothing I could do but wait for Sk8er Boi to come home, but my brain wouldn't stop.
Until today, when I had yet another talk about it with one of my Four Old Guys (that I actually share with Roxie) and he reminded me of the physiological implications of a separation of this nature and it was like a lightbulb had finally turned on!
I've likened breakups to withdrawals from drug addiction and science has too, so why wouldn't a temporary separation have similar implications? It's tempered only by the fact that it IS temporary and we'll be together again soon. I overdosed on Sk8er Boi and the endorphins I experience by being with him before he left, so I miss my fix and that feel good sensation of his presence and attention.
So why isn't he going through something similar? That's easily explainable too. He's with his family and some long-time friends that give him that same pleasurable feeling of love and acceptance that he gets from being with me and his friends where we live, so he isn't experiencing the same need that I am. I've noticed that when I'm in the presence of friends of my own this last week, I've felt more at peace with the situation and now I know it's because I was feeling those love endorphins I so need right now!
Basically, my feelings can be summed up like this: 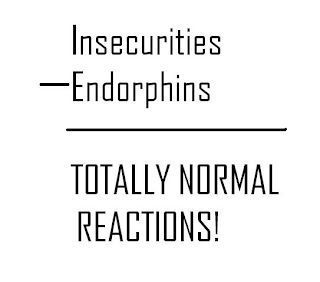 I'm not broken, or crazy. I'm human. I should see Sk8er Boi tomorrow. Everything is most likely totally fine, and I feel a lot better than I did this morning.

Bishops and being single

Last Sunday the first counselor in our bishopric was changed for the third time (meaning four first counselors) since we joined this ward a year and a half ago. The counselor being released seems like a good enough guy, but I never interacted with him really at all (nor the two previous ones). Which made me think about other bishoprics I've known.

I know who our bishop is. He knows my name. But beyond a handshake at meetings or the interviews for callings, I haven't interacted with him much at all. Which seems strange, maybe.

When I was single I KNEW my bishops. They had me in their home. I knew their families. I knew I could call them at any time day or night and they'd turn the porch light on and be there (I think that's true of all bishops and all the members of their wards, but how many of you would feel comfortable doing that? I not only felt comfortable, I did it at least once). Dinners. Interviews. Activities. My bishops were very much a part of my life.

And you know what. That's what I needed then. The priesthood was in my home through my bishops and home teachers. But I really don't need that type of relationship now. Maybe part of that change is because I'm married and I have my husband as my nearest priesthood holder.

I respect all of the bishops I have had. When I needed them to be a larger part of my life, they were. If I ever need it again I know they'll be there. But they can focus on a few people who probably need them more than I do right now.

"Sorry, fairy tale lovers, but true love is something reserved, by and large, for virgins. True love is for the chaste. True love is for married couples, we who do the work and take the oath of marriage, and devote our lives. You cannot get what we have without doing what we do, no matter what your toothpaste commercial philosophy might say."

Something to think about.

They'll be no ties of time and space to bind us. And no horizon we shall not pursue. We'll leave the world's misfortunes far behind us, And I will put my faith and trust in you.

It just takes some time little girl, you're in the middle of the ride. Everything will be all right.

We have a Sunshine Award!

Blogs We Read & Sites We Visit